Illegal extraction of fuelwood or other natural resources from forests is a problem confronted by officials in many developing countries. For example, Tanzania’s Kibaha Ruvu Forest Reserves are “under constant pressure from the illegal production of charcoal to supply markets in nearby Dar es Salaam” and illegal logging is reportedly “decimating” the rosewood of Cambodia’s Central Cardamom Protected Forest. In many cases, forest land covers a large area, which the local people may freely visit. Rather than protecting the forest by denying extractors entry to it, protective measures take the form of patrols throughout the forest, seeking to observe and hence deter illegal extraction activity. With a limited budget, a patrol strategy will seek to distribute the patrols throughout the forest, in order to minimize the resulting amount of extraction that occurs or protect as much of the forest as possible.

We allocate patrols in the patrol zone with probabilities. There are several previous allocation strategies including homogeneous patrol, boundary patrol and ring patrol. We investigated the special circular forest as a start, and proposed an optimal band patrol which can maximize the fully protected “pristine” area of the forest. We also gave an efficient algorithm to calculate best ring patrol, which is a good approximation of the optimal solution.

The forest patrol setting differs from the settings of these previous works in security Stackelberg games, most crucially in that it is essentially continuous rather than discrete, both spatially and in terms of player actions. In the existing problems there are a finite number of discrete locations to protect (e.g., modeled as nodes of a graph), whereas ideally the entire forest area would be protected from extraction. The spatial continuity of our problem setting permits a very different approach, in which we solve for optimal or approximate probability distributions over the region using efficient, combinatorial algorithms, without the use of general-purpose solvers. 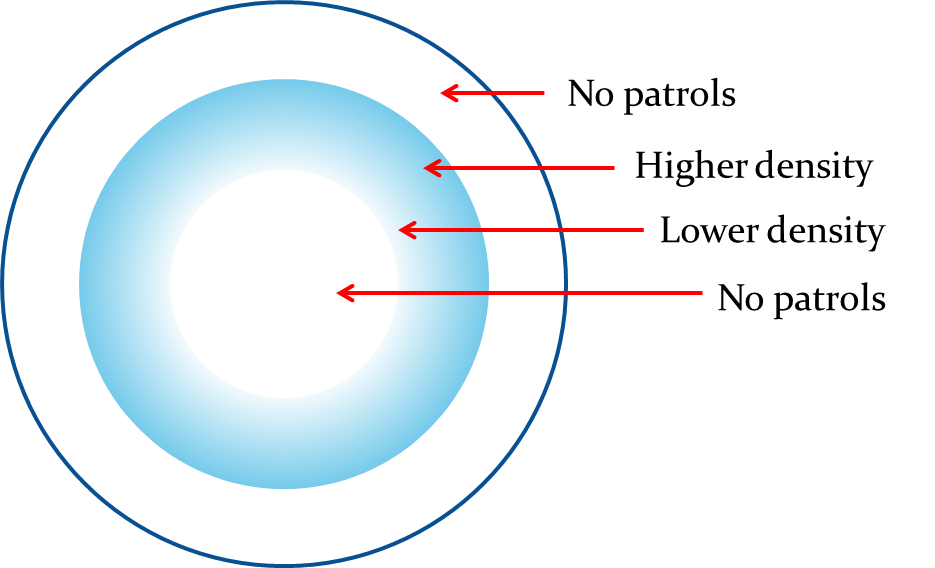 This interdisciplinary work is in a collaborate with forest economist, Professor H. Jo Albers of Oregon State University.